I grew up on a diet of old movies and I love to style-watch them – to play at spot the fabulous frock or the ace accessory. Recently I’ve been a bit obsessed with some of the ridiculous – but wonderful – hats that popped up in 1930s films. And they don’t come much more wonderfully ridiculous than Greta Garbo’s in the 1939 comedy Ninotchka.

The Ninotchka hat was much more than a fashion accessory; it was symbolic of the fact that its wearer had succumbed to the romance of Paris and was shaking off the shackles of communism…. Irene Dunne’s crazy black heatgear in the priceless 1937 screwball comedy The Awful Truth, on the other hand, was representative of nothing more than high fashion – though her newly ex-husband (Cary Grant) doesn’t look convinced…

Cary Grant looks much more at ease in the next picture, from the 1938 romantic comedy-drama, Holiday – maybe because he’s just resigned himself to the fact that he’s outnumbered (by Doris Nolan, left, and Katharine Hepburn) on the silly hat front..

I don’t know if Linda Darnell wore this next hat in a movie, but, given that it seems to be Saturn-inspired in design, it’s way ahead of its time: after all, the sci-fi movie genre didn’t take off until the 1950s!

Similarly, I don’t recall ever seeing Ginger Rogers wearing this next natty hat – by celebrated hat designer Lily Dache – in any of her 1930s films. Maybe the stars circling the pointy peak of the hat was too much like Paramount Studios’ logo for RKO’s (her home studio’s) liking..

And finally, my favourite daft hat of the 1930s – worn, as only she could, by the inimitable Rosalind Russell (pictured here with Joan Crawford) in the gloriously funny and stylish 1939 movie The Women.. 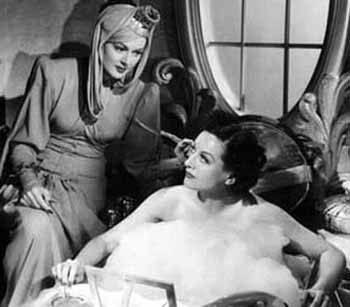