Style on Film: The Big Sleep 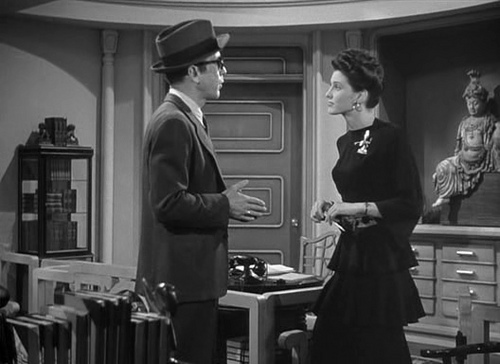 This was the scene that made me sit up and start paying serious attention to the fashions of The Big Sleep, the classic 1946 film noir which is best remembered as the second movie to star the sizzling hot team of Humphrey Bogart and Lauren Bacall. The lady in the chic, tiered black dress didn’t even get her name in the titles – despite being more prominently featured than some of the other character actors. Her name is Sonia Darrin and she played Agnes, the hard-hearted dame who worked for the blackmailer Geiger. The first sighting of the movie’s leading lady Lauren Bacall finds her lounging in a stylish jacket, black trousers and loafers, as her character Vivian has an informal chat with private eye Philip Marlowe (Bogie). 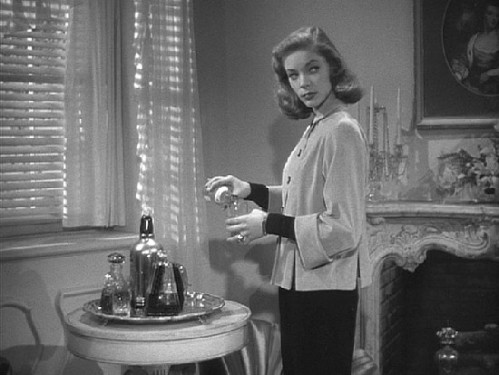 Vivian and Marlowe’s next meeting is even less formal: he brings home her kid sister, the troublesome Carmen, who has been found drunk in charge of the dead body of her father’s blackmailer. 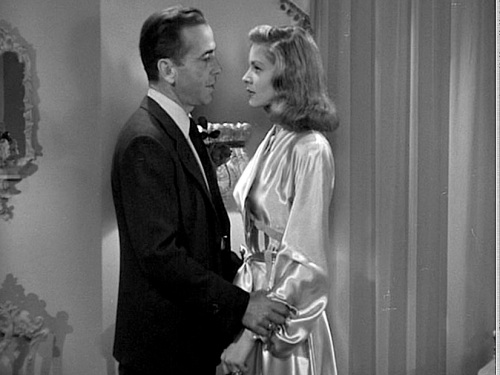 The next morning, Vivian visits Marlowe in his downtown office. The checked suit and beret combo sported by Bacall here is the best known outfit from The Big Sleep, and the publicity shots featured Bacall working what had been christened “The Look” – her unique way of holding her chin down and casting her eyes up as she spoke.

Bacall later explained that “The Look” had been born out of necessity: when she made her first film, To Have and Have Not, she found that the only way she could disguise her nerves, stop herself shaking and her voice from trembling was to hold herself like that.

A rendez-vous at a bar provides Marlowe and Vivian with a chance of trading a little bit more banter – and affords us a glimpse of one of the most contemporary-looking outfits of the movie: the shiny jacket.. 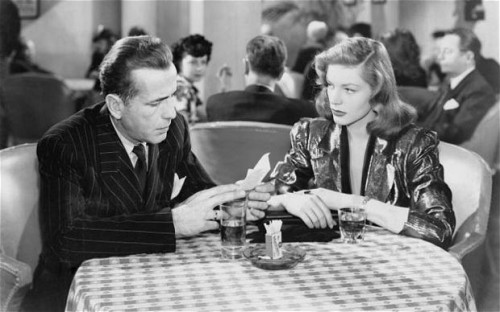 Later that evening, in Eddie Mars’ casino, Marlowe discovers that Vivian – like only a couple of other film noir femme fatales – fancies herself as a singer. Wearing good-girl white (well, she is one of the least dangerous of forties FFs), she is the centre of attention – and quickly captures Marlowe’s interest once more.

And to finish? Two dresses for the price of one as both Agnes and Vivian feature in the next scene – the point in any normal thriller when matters come to a head and the real goodies and baddies are exposed. But this being The Big Sleep, the film with the most convoluted and confusing plot of them all (so convoluted and confusing that even the writer of the original book, Raymond Chandler, couldn’t say who had committed one of the murders), that doesn’t quite happen. Better to revel in the performances, the chemistry and badinage between Bogie and Bacall and the fabulous clothes.

2 responses to “Style on Film: The Big Sleep”