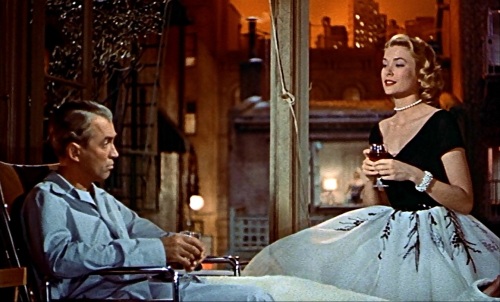 Alfred Hitchcock’s movie Rear Window (1954) is not only a masterwork of suspense; it’s also something of a fashion show with Grace Kelly/Lisa Freemont trotting out one gorgeous summer ensemble after another for both our and James Stewart’s delectation. After all, as James Stewart’s character points out: this is the Lisa Freemont “who never wears the same dress twice”.The costumes in this ravishing-looking film were designed by that doyenne of movie designers, Edith Head, and they had to highlight the differences between Lisa Freemont, socialite and model, and her relationship-shy guy, photo-journalist LB Jefferies. We know Lisa is a class act from the first moment we glimpse her in smouldering close-up, leaning in for a kiss – the simple, elegant single strand of pearls speaks volumes. 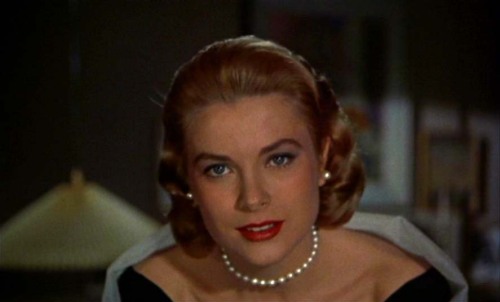 If the pearl necklace and tasteful make-up didn’t immediately connote class and wealth, then Lisa’s description of her beautiful dress being “straight off the Paris plane” gets the message across. With its deep “V” neckline at the front and back,  and full, frothy skirt, it strikes the perfect Grace Kelly balance between sexy and chic, and was undoubtedly one of the most influential movie dresses of the 1950s. As you can see here, she wore it with a thin black patent belt, strappy black heels and a white cape and gloves.

According to Jay Jorgensen’s superb book, Edith Head – The Fifty Year Career of Hollywood’s Greatest Costume Designer (Running Press), Hitchcock’s brief to Edith Head was that Grace “was to look like a piece of Dresden china, nearly untouchable”. And yet, for most of the movie, it’s Lisa who is trying to seduce the incapacitated (he has broken his leg) Jeff … For her second seduction scene – where she’s thwarted by her man’s fascination with his neighbours and the possibility that one of them has bumped off his wife – Lisa is a vision of sophisticated sensuality in a black chiffon dress and the ubiquitous pearls, this time a triple strand necklace.

On the third evening of Jeff’s “last week” in his plaster cast, Lisa turns up looking suitably business-like in a sleek, mint-green skirt suit – after all, she is about to go into action as a detective, having been informed, by Jeff, that he saw their murder suspect going through a handbag stuffed with trinkets . As she unpins her veil and peels off her gloves, she explains to Jeff why this makes it all the more likely that he has done away with his wife: “Women don’t keep their jewellery in a purse getting all scratched and tangled up. And they don’t leave it behind either..” 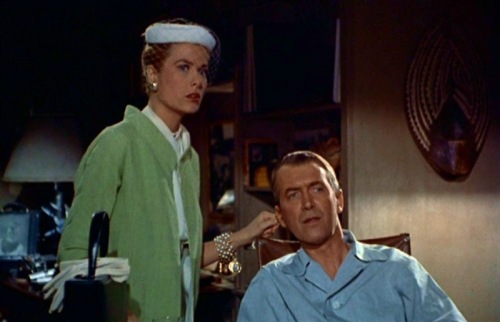 For this scene, the single strand of pearls is back, along with plain, pearl disc earrings – but the whole effect is enhanced by Lisa’s beautiful satin halterneck top and, especially, the fabulous, clunkingly great, multi-strand pearl bracelet on her wrist. Not only does it add a bit of pearly pizazz to the elegant ensemble but it adds weight to Lisa’s case for the prosecution.. “Why, a woman going anywhere but the hospital would always take make-up, perfume and jewellery. .. It’s basic equipment. And you don’t leave it behind in your husband’s drawer.” 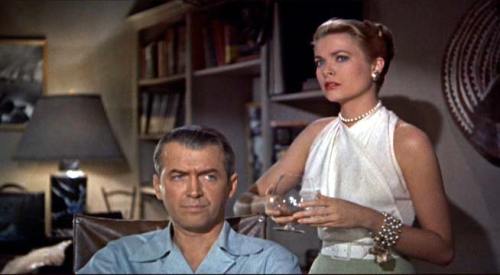 Next, Lisa gives Jeff a masterclass in what else a woman would pack if she was going away for the night … an exquisite negligee. The story goes that when Hitchcock saw Kelly in this nightgown, he asked Edith Head to put in “falsies” to beef up her cleavage. But an indignant Kelly instead stiffened her back and stuck her chest out, and she and Head managed to convince the director that his instruction had been followed.

The weakest link, in my view, in Grace Kelly’s wardrobe for Rear Window is the day dress she wears when Lisa goes snooping in the suspect’s apartment. It has always reminded me of curtains -albeit expensive ones.. See what I mean?

I think the other issue I have with this frumpy frock is that I could equally imagine Stella (the wonderful Thelma Ritter), Jeff’s middle-aged, world-weary nurse, wearing it. I much prefer Lisa’s final look of the film – which is inspired by her man’s wardrobe, and which we see in a slow tracking shot, from the  Gene Kelly-style loafers up to the watermelon pink men’s shirt (which Head nipped in with a scarf ring at Kelly’s waist).