Doris Day, whose wonderfully diverse career is currently being celebrated with a month-long retrospective at London’s BFI Southbank Centre, was not only a terrific singer, actress, comedienne and dancer; she was also a bit of a style icon. And an underrated one at that. Just in time for Sunday’s screening of Pillow Talk (1959), arguably the first and best of Day’s run of chic rom-coms, here’s a tribute to her distinctive pared-down style which flourished in the early 1960s – starting with this Jean Louis-designed ensemble from Pillow Talk. 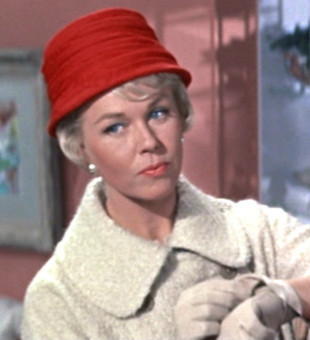 As the sassy, independent interior designer in Pillow Talk, Day works a fab wardrobe of simple, colourful suits, cocoon coats and natty hats. Sadly, decent photos of these outfits are rare on the internet – so on to the equally glorious Lover Come Back (1961), another “sex” comedy with Rock Hudson. Once more Day played a career gal (this time an ad exec) but this time it was Irene, one of the grande dames of Hollywood costume design, who kitted her out in such simple and elegant outfits as this:

White was very much the Doris Day signature colour – no doubt because of its wholeseome, virginal, connotations. She was often seen in white or cream or monochrome. Here’s the stand-out evening dress from Lover Come Back, a film which was clearly an inspiration for Mad Men both in terms of its Madison Avenue setting and its style ..

Irene, who died not long afterwards – in 1962 – put pen to paper on only one other occasion for Doris Day: to design the generally impressive wardrobe for the Hitchockian thriller Midnight Lace (1960). Unfortunately, there doesn’t appear to be a decent picture available of the very-now black lace top which Day wears during one of her scarier scenes but there is a collection of publicity shots of other highlights of her Midnight Lace wardrobe available online, including this next slinky addition to the list of her memorable white evening gowns. She must have loved this dress: she wore it to the 1960 Academy Awards, when she was nominated as Best Actress for her performance in Pillow Talk.

Playing  an American socialite living in London with her smooth-talking businessman husband (Rex Harrison), Day gets through quite an eclectic selection of kit in Midnight Lace – and is, unusually, seen in black twice in daytime scenes. There’s this streamlined, Jackie O-style, suit and pillbox hat combo

And this less formal outfit:

And, finally, here’s Day looking more sophisticated than her character’s romantic naivete would suggest in That Touch of Mink (1962), alongside the most chic accessory a movie blonde in the early 1960s could have – Cary Grant..  This very DD evening outfit was designed by Rosemary Odell though she didn’t receive a credit. 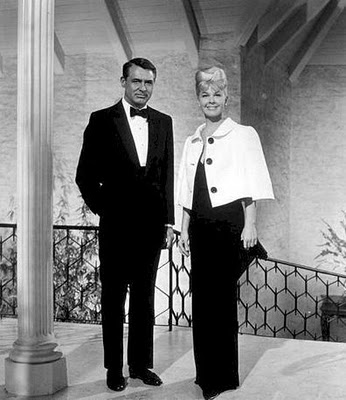 And back to where the style heroism began – Pillow Talk.