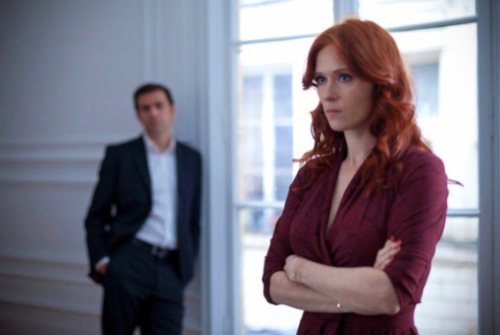 There’s so much to love about Spiral, the gritty and utterly compelling French crime series. There’s the sexy cops, Paris, the sexy lawyers, the apartments, the sexy suspects – oh, and Josephine Karlsson’s hair. The red hair of the fiercely ambitious, morally questionable Maitre Karlsson (Audrey Fleurot) has been a talking point since series 1, and has undoubtedly inspired a rise in sales of red hair tints. In series 5, currently showing of a Saturday evening on BBC4 here in the UK, Josephine’s carrot-coloured locks have darkened – and seem to be darkening by the episode, which is undoubtedly symbolic …

What has struck me more in this series than Josephine’s subtly changing hair shade is the fact that she is never seen without blood red talons. I don’t remember noticing this in previous seasons of the programme, when she was more ruthless. I wonder if it’s a style statement about the character who defies the conventions (not least the rule about redheads not wearing red) in all areas of her life, or if the actress has the same problem as I (and a couple of friends)
have been having over the last year with dodgy nails which only look respectable when painted?

Which brings me to the latest way I’ve been tackling my nail problem: the new No7 Nail Care and Treatments range from Boots. So far, I’ve been very impressed with the results from using No7 Cuticle Oil (£8) and No7 Nail Strength & Grow Treatment (£8),  a twice-weekly treatment that you rub into the nails then rinse off before applying No7 Ridge Filling Base (£8). The last product in the quartet is No7 Cleanse & Prime (£8) which is a leave-on primer which conditions the nails and is designed to be used before the base coat. It removes any remaining trace of your previous polish – ideal if you’ve going from Josephine-style red to a more innocent-looking shade……

* Available from Boots stores nationwide and from www.boots.com

“Try before you buy” may not be a mantra usually applied to hand cream, but I would definitely counsel it as far as the latest launch from Elemis is concerned. Well, maybe not “try before you buy” as much as “smell before you spend”… Why? Because Elemis Jasmine and Rose Hand and Nail Cream (£18; available in March) has a very powerful floral fragrance which is most definitely not to everybody’s taste – least of all (unfortunately) mine, especially as I like to use hand creams at bedtime and I usually like how they smell. I love the rich but readily absorbed texture and it feels extremely nourishing – thanks to its combination of omega-rich oils – but I’m afraid I just don’t want to go to bed with it.

Tagged as Elemis Jasmine and Rose Hand and Nail Cream 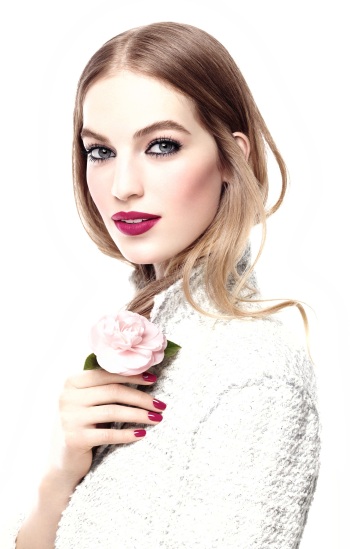 Ooh-la-la, check out the spring collection from Chanel. Magnifique, n’est -ce pas? Inspired by the city of light, it’s entitled Reverie Parisienne and is just the job for brightening up a dull January day. The colours of Paris when its parks and squares blossom in springtime are translated into a palette that takes in pale metallic green, deep pink and dusky lilac for nails, vibrant corals and pinks for lips and coppers and rosewoods for eyes.

The limited edition Blush Camélia Rosé (£36) not only looks exquisite in its compact (the two shades of pink powder are embossed with tiny camellias), but adds a lovely glow to the cheeks.

Pictured above are the Les 4 Ombres (Multi-Effect Quadra Eyeshadow) in Tissé Paris (£40); Le Vernis in Desirio (£18) and Rouge Allure lipstick in Badine (£26). The collection is available from Friday, January 23 at Chanel counters nationwide, including House of Fraser stores.

New year, new skincare regime? If your skin is suffering from dehydration or dryness – and whose isn’t by this stage of the winter? – then check out Botanical Kinetics, a new mini skincare collection from Aveda. Two new moisturisers plus an eye cream make up the range which has been created around a plant energy complex which supports natural energy production in skin cells and harnesses the energy of plants to stimulate the skin’s natural hydrators, helping cells to absorb moisture instantly and retain it for 24 hours. Intense Hydrating Soft Creme (£40) is a light, easy-to-wear moisturiser, for morning and evening use, which suits all skin types. I’ve taken to wearing it as a day cream, as the texture works well for my combination skin and my make-up sits nicely on it. Intense Hydrating Rich Creme (£40) is a heavier proposition, designed for drier skins. I’ve been using it at night, but imagine that it would make a dry skin feel protected as well as moisturised if worn during the day. Also just out is Botanical Kinetics Energizing Eye Creme (£35), a lightweight creme developed with sufferers from dark circles and puffiness in mind. Available at Aveda counters, salons and spas nationwide, and from www.aveda.co.uk.

No Common or Garden Collection

If you’re in need of an antidote to the miserable weather, look no further than Clarins’ spring collection, Garden Escape, which goes on counter today. A fresh and pretty range, it will not only boost your spirits but also give your possibly dull winter complexion a boost of radiance. With colours inspired by nature, there is something for everyone in this bijou collection which includes a beautiful 6 Colour Eye Palette (£32), featuring greens, pinks and beiges in different finishes, and a gorgeous new blusher, Blush Prodige in Sweet Rose (£26), which is guaranteed to give your skin a healthy glow.

* Available at Clarins counters nationwide and from www.clarins.co.uk and www.houseoffraser.co.uk

Scaffolding for the Skin

If your new year’s resolution is to acquire a Hepburn-esque jawline (either Audrey’s or Katharine’s will do) – or at least maintain the definition of your own – then there’s one newly launched cream that should be on your beauty shopping list. Clinique‘s Repairwear Sculpting Night Cream (£58) helps to define the appearance of facial contours along the cheeks and jawline, and keep sagginess on the neck and chest areas at bay. Put it this way: if you want a swan neck  that you can show off, rather than a turkey neck you want to cover up, this is the cream to try. Oh, and it feels lovely too – a luxurious, comforting moisturiser which is a pleasure to use just before bed. 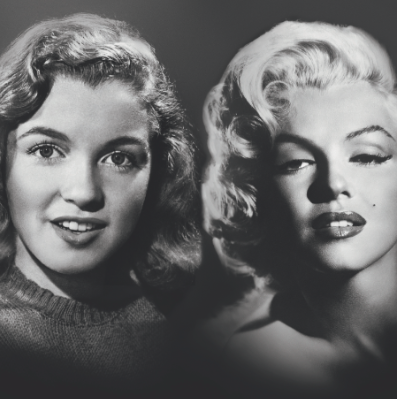 Marilyn Monroe has this morning been revealed as Global Glamour Ambassador for Max Factor – and from tomorrow will be seen in advertising campaigns for Max Factor across the media. Is it just me or is it weird having a dead person as your “ambassador”? Sure, Marilyn’s iconic look – which was created by Hollywood make-up guru Max Factor – has timeless appeal and is still widely copied today. But frankly I am uncomfortable with these campaigns where you see dead people being used to advertise products that they didn’t advertise when they were alive, and/or where words are put into their mouths. I was surprised when Chanel used Marilyn Monroe for a No5 campaign in 2013, but at least they used newsreel footage of her, accompanied by her own voice giving the famous quote about wearing the perfume to bed – rather than manipulating her likeness to bring her back to life.

In recent times we’ve had cameo roles from computer-generated Marilyn, Grace Kelly and Marlene Dietrich in a Dior ad, while a sort of plastic, lookalike version of Audrey Hepburn has been used in a chocolate ad campaign. It was better – and arguably required more wit and brain power – in the pre-CGI days when clips from films were cut and pasted together (a la Carl Reiner’s inspired 1982 film noir pastiche Dead Men Don’t Wear Plaid) to make such clever ads as the brilliant Holsten Pils ad, which used recognisable clips from Some Like It Hot and certainly wasn’t trying to imply that Monroe would have endorsed the brand.

And while I’m getting stuff off my chest, why does Max Factor keep insisting in its press material that Marilyn was a 1940s star?! She was certainly in Hollywood and playing small roles towards the end of the 1940s, but she only began to catch the eye of film-goers in 1950 when she had small but memorable parts in All About Eve and The Asphalt Jungle. And it was 1953 before she had her first starring role.

Pat McGrath, Max Factor Global Creative Design Director, is quoted as saying: “Marilyn made the sultry red lip, creamy skin and dramatically lined eyes the most famous beauty look of the 1940s.” Er, hello? No she didn’t. She may have made that combo the most emulated look of the 1950s, but the sultry red lips and natural yet defined eyes were around throughout the Second World War, when Marilyn was still Norma Jeane. Just look at pictures of Rita Hayworth and Betty Grable. Creamy skin, red lips and big lashes.

What’s disappointing about the Max Factor brand’s carelessness with dates and pedantic stuff like that is that it is, ironically, a company which is a key part of Hollywood history. However, it’s certainly true that Norma Jeane Baker entrusted her gradual transformation into the Marilyn Monroe we know and love to the team at the Max Factor Beauty Parlour on Hollywood Boulevard – and that what became her signature look is still hugely inspirational today.

But it’s not all complaints from me: Max Factor has also today announced the launch of #GlamJan, a rallying call encouraging women around the world to glam up with make-up in this drab month of January. Inspired by the transformation of Norma Jeane to Marilyn, #GlamJan is a social media campaign led by Pat McGrath and famous faces including fashion model Candice Swanepoel, which invites women to post their most glamorous self using the hashtag #GlamJan and a message about how good it feels to glam up.