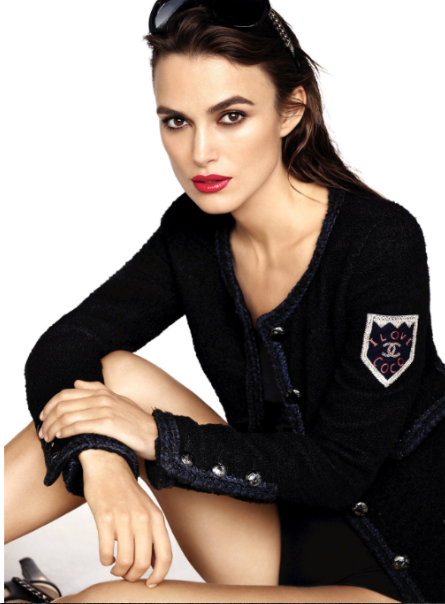 I’m surprised that Chanel haven’t chosen May 5 – 5/5/15 – to celebrate Essentially Chanel, the five beauty products they consider the most iconic amongst their make-up and skincare collections. Why? Because their founder, Coco Chanel, was famously superstitious and five was, as we all know, her lucky number. Nevertheless, the company is offering customers the chance to discover their top five at counters across the country from now until May 8. Simply visit a Chanel counter and enjoy a complimentary bespoke make-over, packed with expert tips and background info about the products.

The five Chanel essentials you’ll learn about are the new formulation of Rouge Coco lipstick (as modelled by Keira Knightley, above), Hydra Beauty Micro Serum (the latest addition to the fab Hydra Beauty range for dehydrated skin), Soleil Tan de Chanel Bronzing Make-up Base (a versatile bronzer that can be used on top of or under foundation), Le Volume de Chanel (one of the best mascaras on the planet at the moment) and Le Blanc de Chanel (an illuminating base beloved by make-up artists).

It’s interesting to learn which products Chanel regards as its most iconic essentials. Personally, I certainly couldn’t be without my Hydra Beauty Serum (I haven’t tried the Micro Serum yet) and Gel-Creme, my Le Lift Creme and Eye Cream and my Le Volume mascara. What’s your top five? 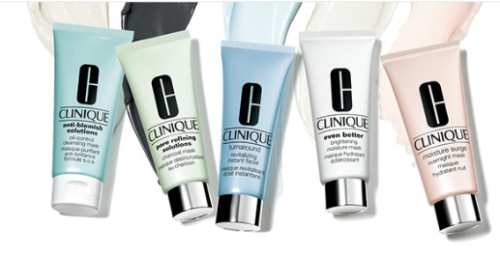 Clinique has just expanded its line-up of face masks with the launch of three new additions to the already impressive collection. (I’m a long-standing convert to the Moisture Surge Overnight Mask, £30, which is an SOS treatment for dehydrated skin.)

Even Better Brightening Moisture Mask (£34) is an ideal investment for anyone who wants to be able to give their complexion a quick shot of radiance and hydration at the same time – maybe while getting ready for a night out. It has a creamy, luxurious texture, and is fast (five-ten minutes) and easy to use and delivers great results. My skin felt fab after using it – smooth and hydrated – and it looked healthy and even-toned.

Turnaround Revitalizing Instant Facial (£35) delivers similar results even more quickly, with the emphasis on boosting radiance and revving up cell turnover to reveal fresh skin. With its granules, it has an exfoliating effect too. A facial in a tube!

Pore Refining Solutions Charcoal Mask (£22) is the perfect prescription for anyone with over-oily skin since it is a mattifying treatment which absorbs oil, impurities and environmental pollutants to detoxify the skin.

For best results, all of these masks can be used a couple of times a week and they tie in with Clinique’s various specialist skincare ranges. 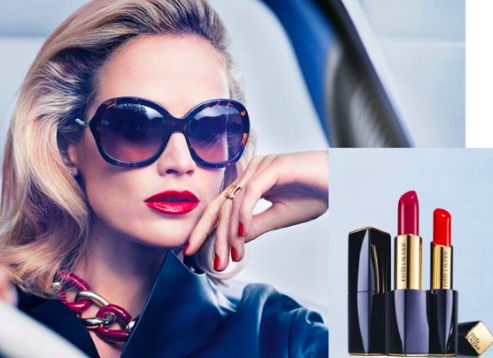 Oooh, I think that this summer, I’m going to aspire to look like Carolyn Murphy in this photo …  Thanks to my oversized tortoise-shell sunglasses, I was already part of the way towards fulfilling my goal – but then I was sent one of the new Estée Lauder Pure Color Envy Shine Sculpting Lipsticks (£25), and I’m now halfway there!

These new lipsticks are siblings to the Pure Color Envy collection and come in a similarly elegant squared tube with a magnetic closure. The multi-faceted colour pigments help shape and define the lips, while making them look plumper. Whereas the original lipsticks have a creme finish, the new ones offer a glossy look which is fresh and sexy for the summer.

Choose from 16 gorgeous shades; the bright corals, pinks and reds are particularly striking. Be warned, though: your initial impression might be that the lipstick is going to dry your lips, but in fact, it’s comfortable even on dehydrated lips and provides lasting moisture as well as shiny colour. 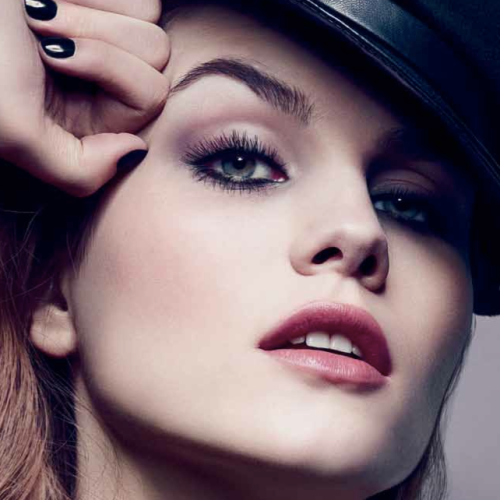 Clumps are for chumps – eyelash clumps that is. And these days, there’s no reason to put up with a mascara that clumps eyelashes together or clumps together on the brush.

I’ve probably tried a couple of hundred mascaras in my 20 years on the beauty beat, and have undoubtedly notched up more misses than hits in the lash department. Why? Because few mascaras seem to be able to do what I require of them – i.e. curling, adding volume and separating the lashes –  without leaving me looking panda-like by the end of the day. So, whenever I find a mascara that ticks all my boxes, I take note so that I can buy some the next time I find myself in need of a level of eyelash perfection that isn’t being matched by the newest mascaras I’ve been sent to try.

My most recent discovery – and newest addition to my (short) list of perfect mascaras – is Max Factor Clump Defy Volumising Mascara (£10.99). It’s just wonderful. It does everything I require of the ideal mascara (see above!), is easy to use and lasts extremely well. I particularly love the way it curls my stumpy lashes, and the intensity of blackness it gives them. (It’s also available in brown.) 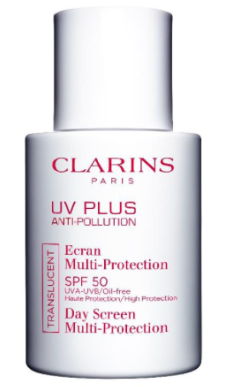 The sun has got his hat on – hip, hip. hip hooray! – so it’s time for us to make sure we have our sun protection on. And the latest sunscreen to check out comes courtesy of Clarins. Its UV Plus Anti-Pollution Day Screen SPF50 (£32) is the next step up from its successful SPF40 version and has been designed to protect skin not just from UV but also from pollution.

Its lightweight texture and transparent appearance mean that it is compatible with all skin types and colours, and make-up goes on a treat over it – that’s if you still want to wear make-up over it .. you might not want or need to since it leaves skin looking healthy and fresh, and keeps it shine-free.

And as if all that wasn’t enough, it comes in a wee bottle that’s dinky enough to be stashed in your handbag or pocket. The first hit of the summer of 2015, I’d say. 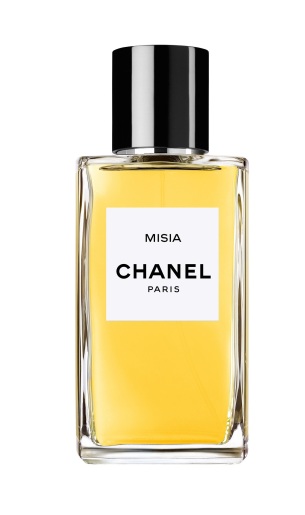 Since I was treated to my first sniff of Chanel’s 31 rue Cambon fragrance a few years ago by its creator, Jacques Polge, in Mademoiselle Chanel’s apartment at that address, I have been a big fan of Les Exclusifs, the collection from which it comes. Each of the Exclusifs perfumes was inspired by and evokes a particular aspect of Coco Chanel’s colourful life or her wide-ranging influences and passions.

This spring, the company has added a new fragrance to the collection; the first Exclusif by perfumer Olivier Polge, Jacques’ son. Named Misia, the new addition fits beautifully into the 15-strong family of fragrances  – yet it more than holds its own. It is named for its inspiration, the enigmatic Misia Sert, an intime of Coco Chanel from the late 1910s, a period when the fledgling couturiere was honing her tastes and finding her style. Sert opened Chanel’s eyes to styles, such as baroque, and opened doors for her into the thriving Parisian arts scene.

It was through Sert – a Polish-born pianist and muse to such important artists as Toulouse-Lautrec, Bonnard, Valloton and Renoir (whose portrait is shown below) – that the young Gabrielle Chanel met such key figures as Igor Stravinsky, Jean Cocteau and Pablo Picasso, and began her association with the Ballets Russes. 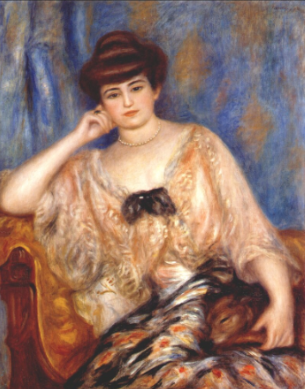 And it’s the olfactory world of the Ballets Russes which particularly informs this new fragrance which is dominated by the powdery scent of violet, swathed in Grasse rose. It evokes the smell of the make-up which the dancers would have been wearing, and recalls the Parma Violet scent of vintage face powders and blushers. At the same time, however, there is a freshness and warmth which goes hand in hand with its timelessness.

As Olivier Polge says: “My inspiration wasn’t Misia herself as a person but her role as a turning point in the life of Gabrielle Chanel. With this fragrance, I wanted to convey the atmosphere of the Ballets Russes and the smell of make-up from that time.” What more could a Chanel devotee want than a perfume which can catapult her back in time to the moment when 20th century fashion was born?