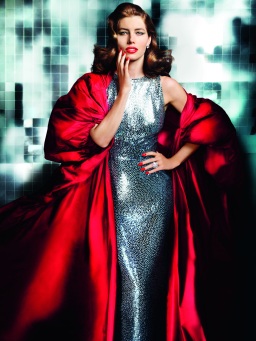 There’s nothing like a bit of retro glamour to brighten up a dreary November day – at least that’s what I found when I gave myself the Revlon Fire & Ice treatment on Monday. This beautiful red lip and matching nail shade was introduced by the American company back in 1952 and has been revived just in time for Christmas.

which featured one of the world’s prototype supermodels, Dorian Leigh, and was shot by the legendary Richard Avedon.

I love the Revlon Fire & Ice Lipstick (£7.29) and the All Fired Up Nail Enamel (£6.29) – both exclusively available from Boots, from December 1. The nail varnish is the first to tempt me away from shocking pink in ages, and I’m having fun trying to figure out the best eyeshadows to go with the lipstick. Mind you, I have to say: I much prefer Dorian’s Fire & Ice look to Jessica’s … 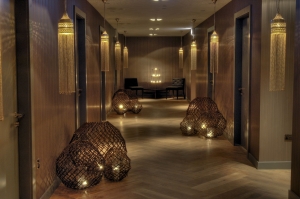 Tuesday was an exciting day – it was the day I finally got to try out the new Spa at Blythswood Square in Glasgow. Housed in the vast (10,000 square feet) basement space in the new Blythswood Square hotel, this is the city’s first luxury spa – and it certainly looks the part. As the photo of the corridor (above) off which the nine treatment rooms run, it exudes five-star style.

In addition to the treatment rooms, there is a thermal suite with a spa pool, saunas, relaxation areas and a cafe in the spa. It’s easy to see how

you could spend a day here, just devoting yourself to the art of relaxing. Anyone who’s booked in for a treatment can use the facilities before and/or after their appointment so make sure you allow plenty of time on either side of your booking.

I was booked in for an Anne Semonin Phyto Aromatic Facial (£80 for 55 minutes) which was indeed relaxing. The therapist tailored the treatment to my skin’s needs and used products designed for sensitive skin – yet my cheeks flared up not long afterwards and didn’t calm down for days. I think I’ll try something else next time: it’s not going to put me off indulging in such luxury, no sirree!

Oh dear, on Wednesday I looked like I might be coming down with something – I was even paler than usual and my normal blusher didn’t seem to give me the lift I required. (Plus, with it being pink, it was a bit too close to the shade of my newly blotchy cheeks!) So I turned to a blusher which has saved me from looking like a ghoul (or, worse still, Gillian McKeith) in recent months: Guerlain 4 Eclats in Caresse de l’Aube (£31; www.johnlewis.com). I had thought this was part of the Guerlain Christmas collection but clearly I had mis-filed it: it came out with the autumn colours but was such a hit, it’s become a permanent part of the make-up range. Swirling the four shades together means you can add a natural colour all over the face, where required…

On Thursday, I was thrilled to open my post and find Chanel’s spring 2011 colours there. It’s too early to write about them, save to report that they are absolutely stunning – and based on Coco Chanel’s favourite jewel, the pearl, and its luminous effects.

The spring 2011 collection has a bit of an edge to it, unlike the current Christmas collection, Les Tentations de Chanel (above and left) which is more classically beautiful in my view. Really, there’s something for everyone amongst the sumptuous pinks and golden browns – though, sadly for me, the gorgeous shocking pink blusher – Les Tissages de Chanel Blush Duo Effect Tweed in Tweed Fuschia (£31) was just a bit too strong a shade for me. Love, love, love the nail and lip shades, though – Chanel Le Vernis in Pulsion (£16.50) and Chanel Rouge Coco in Patchouli (£21.50), in particular.

Lunch and a catch-up with my beauty therapist pal Margaret on Friday gave me a chance to hear her thoughts on the Estee Lauder Advanced Night Repair Eye Synchronized Complex (£35; www.esteelauder.co.uk) I had asked her to test.

Here’s what she had to say about this new cream-gel which promises to reduce the look of every key sign of ageing around the eye area, thanks to its ability to support the natural synchronisation of the skin’s repair and protective mechanisms.

“I really enjoyed using this beautifully textured treatment, but wouldn’t recommend it to anyone with highly sensitive skin because it contains very active plant extracts. For the rest of us, it’s not going to ‘rock your world’,  but it is a good maintenance product and is a pleasure to use – oh, and it has all the latest beauty wonder ingredients, including hyaluronic acid.”

My week started in a glamorous gothic fashion when I went to the opening night of The Rocky Horror Show in Glasgow. I may have been disappointed in the show but enjoyed the references to 1930s horror movies as I loved all those films – Bride of Frankenstein especially – when I was a teenager.

I’ve only met a handful of genuine stars among the many celebrities I’ve interviewed – and I’ve probably only interviewed one bona fide movie legend: Fay Wray (left), the actress who was dangled over the Empire State Building in King Kong back in 1933.

When I interviewed Miss Wray in 1998, she was already on the wrong side of 90 but before she would let me start firing questions, she insisted – in a distinctly non-diva-like way – on applying some lipstick. The still striking nonagenarian realised that she had no mirror and asked if I had one. I lent her my Bobbi Brown compact and she proceeded to apply a shocking pink lipstick.

A couple of weeks later, I spied a compact with two mirrors – one of them a magnifying one – in a shop near my office. I bought it and sent it to Miss Wray at her Trump Towers home. Imagine my surprise and delight when she wrote back to thank me … The power of lipstick and a compact – unites all women!

And speaking of horror movie legends, that was one of the subjects of conversation over a dinner at the elegant Blythswood Square hotel in Glasgow on Tuesday. The occasion was to celebrate the arrival of Giorgio Armani Cosmetics at Frasers in Glasgow.

I was sitting next to Frederic Letailleur, who has the impressive title “international face designer”  for Giorgio Armani Cosmetics, and we discovered that we had much in common – notably a passion for old movies, and, especially, movie music. Frederic is also a fan of old horror movies and actually began his career doing the make-up for monsters and aliens on stage and screen. (Perhaps that should have rung an alarm bell when he offered to do my make-up, but he was so charming that it didn’t.)

We all had a great time – indeed, at one point there were so many animated conversations going on round the table of glamorous people that I felt I was in the party scene of Breakfast at Tiffany’s. Right down to the fact that I was sitting next to a Fred. Luckily, nobody’s headgear caught fire.

After a considerable amount of champagne (bubbles like company, I find), I really could not be bothered with the palaver of washing my face with my usual rinse-off cream. Instead, I turned to what is currently my favourite beauty short-cut, Clarins Water Purify One-Step Cleanser (£17.50; www.clarins.com), pictured above. This gorgeous-smelling liquid cleanser removes all traces of make-up in one fell swipe, and leaves the skin feeling soft, smooth and refreshed. Hope they do a travel size… 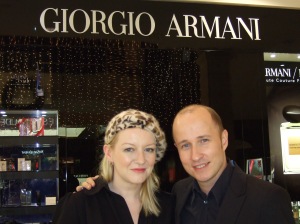 I was reunited with Fred on Wednesday for the promised makeover.  The new Giorgio Armani space in Frasers’ beauty hall is impressive – large and elegant – and I was able to have my make-up done fairly discreetly, which is always a good thing if you don’t want passers-by spying you with a naked face..

What was striking about the Armani makeover was how fast and effective it was. Fred used a wonder cream, called Crema Nera (£180) to prepare my skin. This luxurious moisturiser calms redness and evens the skin tone. Then, before it had completely sunk in, he was applying Fluid Master Primer (£32) to mattify and ready the skin for the utterly gorgeous foundation, Luminous Silk Foundation 2 (£32) which he brushed on. Of the various aspects of the makeover, I think it was the base which impressed me most – Fred gave me a glowing, healthy-looking complexion by using a dash of bronzing liquid.

He said: “I mixed Fluid Sheer 10 (£28) in to the foundation to give you an added touch of warmth, then I dabbed it with a blusher brush over the cheekbones and along the hairline. This builds the warmth on areas which would be exposed to the sun but in a more natural manner than any powder bronzer could achieve.”

On the eyes, Fred used two eyeshadows, 13 and 14 from the new Eyes to Kill collection, plus the vampish, Excess Mascara (﻿﻿£23)  fromthe same range.  The coppery colour palette matched my leopard print beret a treat! 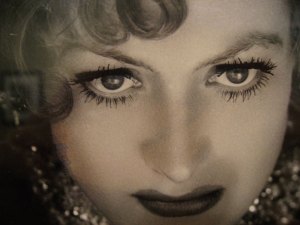 It certainly gives good lash – plenty of flappability and come-hither potential but, as with the last under-a-tenner mascara I tried out, it left me with smudges under the eyes. If you’re prone to panda eyes, avoid this mascara – but if not (lucky you!), I’d highly recommend it for the party season when black lashes are as essential the little black dress…

Joan Crawford would probably have scratched my mascara’d eyes out to get her mitts on the lipstick in Clarins’s limited edition Christmas collection. Clarins Rouge Prodige in Barocco (£16) is a beautiful deep claret shade which is a terrific alternative to the dark purples that are around just now – especially if you fnd that that shade can drain you.