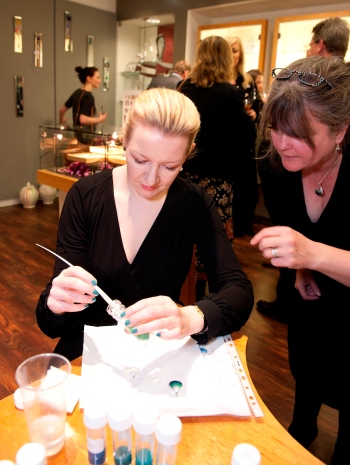 You may have seen this photo before but it seems the ideal one to use to illustrate my trip to Edinburgh on Tuesday night for a sumptuous dinner hosted by Estee Lauder’s press team. The reason it’s the ideal pic is that I was wearing the same dress – and just about half the journalists at the table in the exquisite Number One restaurant at the Balmoral were sporting the nail varnish I’m wearing here – Estee Lauder Pure Color Nail Lacquer in Teal Topaz (£14; www.esteelauder.co.uk).

The dinner was a 30th birthday celebration – not of a person, but of Lauder’s now-iconic serum, Estee Lauder Advanced Night Repair, now going by the name of Estee Lauder Advanced Night Repair Synchronized Recovery Complex (£41 ) and reformulated to harness the latest research in genetic ageing while holding true to its original mission of reducing the appearance of past damage from environmental assaults and

While the press girls had us under the spell of champagne and Michelin-starred food, they also gave us a preview of their summer make-up. Estee Lauder Bronze Goddess 2012 – The Capri Collection goes on sale at Jenners, in Edinburgh this month, before it hits counters everywhere else in May – and Edinburgh ladies who passed the beauty squad post-dinner will undoubtedly be forming an orderly queue… We all had a play with the products – and went into the night smelling divine, thanks to the Bronze Goddess Luminous Liquid Bronzer (£27) we were trying on our hands and forearms….

Eugh, I felt a wreck on Wednesday after a particularly disturbed sleep in a Holiday Inn
Express which had previously seemed very comfortable and quiet. I was awake every hour thanks to a combination of the racket coming from the room opposite, the noise of traffic on the stairs through the wall from me and my usual first-night restlessness when away from my own bed.

Anyway, the result was that despite having fused Kim Novak and Veronica Lake influences the night before, I looked more like Simone Signoret – at least in the heavy-lidded eye department – the morning after. Only one thing for it: Clarins Skin-

Smoothing Eye Mask (£29.50; www.clarins.co.uk). This has turned out to be an absolute must-have for me lately as it seems to be the only way of waking up my eyes when the lids weigh heavy on them ..

I took the train to London on Thursday for a quick visit to interview the wonderful singer-songwriter – and fashion plate – Melody Gardot whose new CD, The Absence (Decca), comes out at the end of May. Since I last met her three years ago, Melody has visited more countries than I’ve probably managed in the last 15 years – and she has absorbed musical and style influences wherever she’s been.

When she opened the door of her hotel suite to me, she was a vision in a fringed Lanvin dress and Moroccan-style turban into which her still long (she assured me) locks were 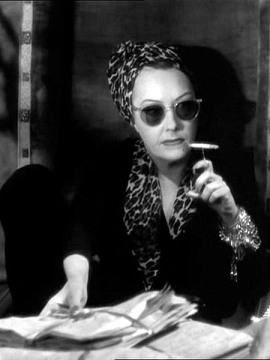 tucked. The turban and 1940s-style shades were very Gloria Swanson-in-Sunset Boulevard – and I told her so. Apparently, I was the second person in a day to compare the 27-year-old to the great Gloria (the other comparison had been a vocal one) – but she couldn’t visualise Swanson, so before I left, I had to help find a photo..

Anyway, Melody’s make-up – as ever – was exquisite  (see the video below too); perfectly defined eyebrows sat above the retro specs, Hollywood red lips offset her newly nut-brown skin and her nails were painted a metallic sand shade which offset the camel colour of her turban and wrap. Having been on a train for five hours, I felt bedraggled by comparison but had at least made my own nod to glamour in the form of my Chanel’d nails (the April shade which has been my favourite for months now). I painted them on the train – a calculated risk, but worth taking since I had my handy Rituals Nail Varnish Corrector Pen (£6.90; from John Lewis and www.rituals.com)  with me…

excuse to move on from April to, no not the May or June shades of Chanel nail polish – but one named Distraction.

Chanel Le Vernis in Distraction (£18) is part of Rose Ultimes de Chanel, a mini collection, coming out on May 11, of lip glosses and nail varnishes based around a pink theme. I have totally fallen for this gorgeous coral shade which is extremely pretty and very retro. And it went a treat with my top (shown below, in photo with my pal Lizzy) which has multi-coloured (including coral), Sergeant Pepper-style, frocking.  With two coats, it’s perfect against pale skin like mine .. Goodbye April, hello Distraction!

I was just sent a couple of pictures of me – and my Estee Lauder Pure Color Nail Lacquer in Teal Topaz (£14) – in action at last Thursday’s party at the Orcadian jewellers, Ortak.

Here I am painting the enamel, in liquid form, on to one of the new range of pendants inspired by the elements. 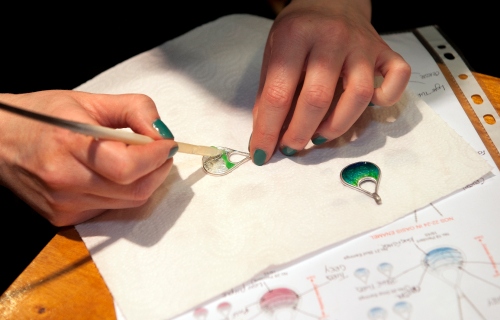 A dressy night at an event at the elegant brasserie in Glasgow’s Millennium Hotel, to celebrate the Chinese New Year, was the perfect occasion to road-test some of the latest make-up from Estee Lauder. Creative make-up director Tom Pecheux’s new collection is called Pure Color Topaz and was inspired by the colours of the Arizona desert. Being fair-skinned, I wasn’t sure how much of this gold, copper and teal themed range would suit me but there does seem to be something for even us pale faces.

‘Tis the season of the skincare launch, so on Monday I had coffee at the Malmaison Hotel in Glasgow to hear the latest Aveda and Darphin news from chic PR double-act Cemo and Poppy. Amongst the numerous innovations from the two natural beauty companies, I was particularly smitten with the sound of the new moisturiser for the early signs of ageing, Ideal Resource (£50), and the newly relaunched (in a smaller tub) Darphin Aromatic Cleansing Balm with Rosewood (£30; www.darphin.co.uk).

So much so that almost as soon as I got home, I used it to take off my make-up. A tiny amount goes a long way – I’m on red alert, however, as my cheeks have flared up so it’s maybe not the best choice for sensitive skins.

Charlotte, the new PR from Origins and Ojon, two more natural beauty companies from the Lauder stable, took up residence at Glasgow’s Blythswood Hotel on Wednesday to share the news from her brands. As a loyal fan of Ojon – whose haircare products are the ones on which I rely most of all – I was delighted to hear about its new anti-ageing hair range, as well as its new trial size sets.

Targetted at women of 35 and over, it is the latest serum to take on age spots and discolouration, which were recently named as women’s top ageing concerns. I’ll need to find a tester for this one as age spots (touchwood) don’t seem to be an issue for me – though this serum does claim to be preventative as well as being able to improve the appearance of age spot-afflicted complexions. .. 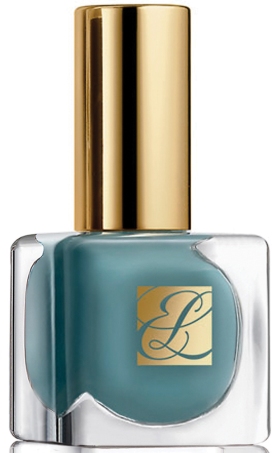 I was finally enticed away from the Chanel nail colours which have held me in their sway over the last few months – Pirate, Rouge Carat and the new one, April – by one of the loveliest shades that I’ve seen so far for spring: Estee Lauder Pure Color Nail Lacquer in Teal Topaz (£14; www.esteelauder.co.uk).

It proved the perfect choice (teamed with a black dress, of course) for the party I was attending at the Glasgow St Enoch branch of the Orkney jewellery company Ortak.  Little did I realise when I painted my nails that I would soon be painting enamel in the same colour palette of teal, turquoise and green on to a silver pendant as part of a demonstration of the new range of enamel jewellery inspired by the elements.

I’ve always liked the actress Julianna Margulies – even when she played Nurse Hathaway, you know: the one who snagged George Clooney in ER. I love her current show, The Good Wife, and have been struck in the new series by her new hair-do, which involves the first fringe I’ve ever seen her with.

Coincidentally, one of my girlfriends has always had the look of Julianna about her – and when I met her for coffee on Friday, she revealed a newly cut fringe and bobbed hair which took years off her and added to the glow she already has from being pregnant.  When asked if she had had her hair coloured as well as cut (I knew she was struggling with the fact that she couldn’t get her roots done), she said that her Iranian hairdresser had given her a great tip: brush dark brown eyeshadow on to the roots each day until she can safely get her hair coloured. So it seems that the Bobbi Brown palette I gave her for Christmas is getting put to an unexpectedly novel use!