Apart from David Raksin’s lovely theme tune, I’m not much of a fan of Otto Preminger’s newly re-released 1944 noir melodrama Laura – about the investigation into the murder of a beguilingly beautiful young woman played by the luminous Gene Tierney (above, with Vincent Price) – but I do love most of its heroine’s style. The wardrobe sported by Tierney, and designed by Bonnie Cashin, is much softer and less tailored than the clothes worn by other 1940s female characters in film. Here’s how Laura looks when her admirer, the acerbic newspaper columnist Waldo Lydecker (Clifton Webb) recalls first meeting her, when she was 17.

On the night that seals Laura’s “doom” – when she meets smooth-talking southerner Shelby Carpenter (Vincent Price in an especially annoying performance as an especially annoying character) – she’s a vision in a cowl-necked, hip-hugging, vaguely Grecian-style evening dress which is accessorised with  a brooch on one shoulder and an elegant cuff.

Here it is again, this time in a studio publicity shot … 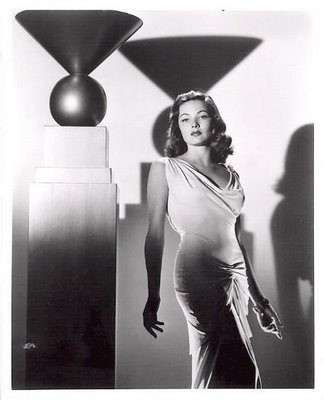 A successful advertising agency executive, Laura might be expected to be kitted out for the office in sharp suits and angular hats – but, as if to reinforce her image as a gentle, kind-hearted creature, she is only seen wearing almost informal workgear (simple sweaters and skirts) and floppy, cloche-like hats. Here she is getting ready to leave the office wearing the hat which Shelby tells her he “approves of”. 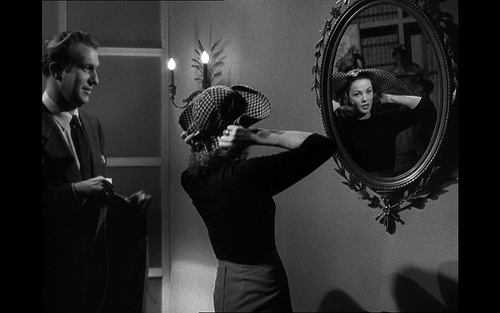 When she visits the jealous Waldo shortly afterwards, Laura wears this stripy tunic top with a peplum – how 2012 is that? 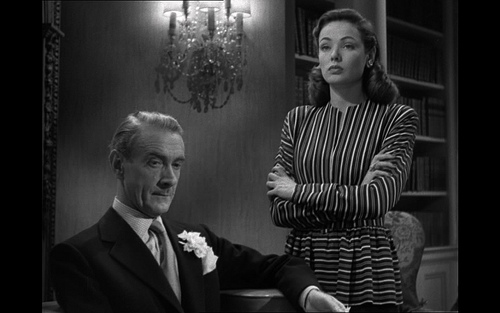 From the start of the film, everyone thinks that Laura has been murdered. The cop investigating the case, McPherson (Dana Andrews), becomes so obsessed by her that he is sleeping in her apartment when she turns up alive after weekending in the country – an angelic vision in a white raincoat and another coquettish, floppy cloche hat.

Weirdly, Laura seems more dressed up in the morning, when she’s making breakfast – in her broad-shouldered kimono jacket, palazzo pants and high heels – than she does for going out to work… 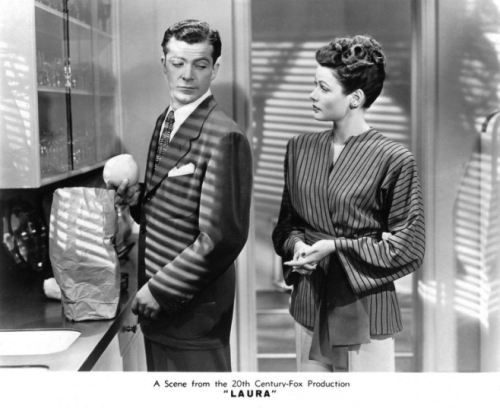 Another unusual outfit is the pencil skirt and tunic ensemble Laura wears for a little soiree in honour of her homecoming, towards the end of the film. The top with drawstring, peasant-style neck, bracelet-length sleeves and is tightly fitted over the hips and tummy – and it’s quite unlike anything the other female characters are wearing in this film, or any other of the era. Laura wears it with only a diamond ring and a sparkling cuff – and outshines every other dame (as McPherson would say) in the room. When she’s taken to the station for questioning, she throws a matching shawl round her neck. 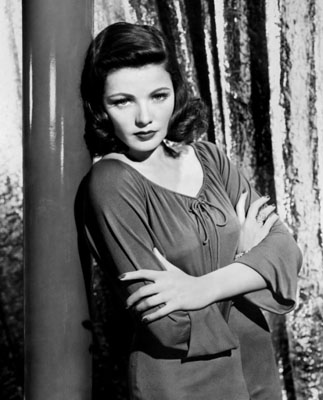 There is one rival in the style stakes in this movie: Laura’s socialite aunt, Ann Treadwell (played by Judith Anderson, best remembered as dowdy and creepy Mrs Danvers in Rebecca). When we first meet her, she is sporting a sarong and a black top accessorised with a series of surrealist-style brooches.

5 responses to “Style on Film: Laura”