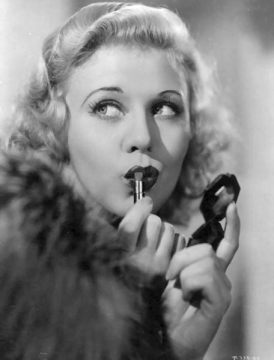 This is the year of the lipstick. After all, so far this spring we’ve seen new lipsticks being launched by Estee Lauder (Pure Color), No7 (their new Poppy King range), Clarins (Rouge Hydra Nude), Dior Addict and Guerlain (Rouge Automatique). Chanel’s creative director of make-up, Peter Philips, continued on his mission to convert girls to the lipstick cause by launching the glossy Rouge Coco Shine…. Lipstick is having a moment, as they say in fashion-ville; though for many of us it’s never gone out of style.

After all, it’s difficult to resist the way a slick of lipstick can lift the spirits by brightening the smile. Not only that, but lipstick is a shortcut to glamour and can instantly transform the appearance in a way that no other single item can. Gwyneth Paltrow summed up the powerful effect of lipstick when she said: “Beauty, to me, is about being comfortable in your own skin. That, or a kick-ass red lipstick.”

For the millions of women who have bought Chanel lipsticks since they were first sold in 1924, owning 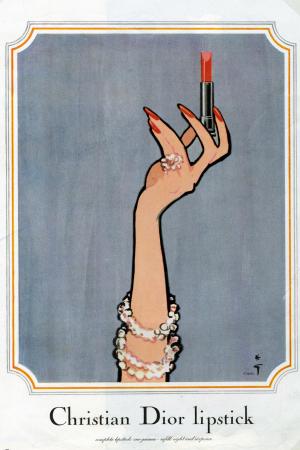 one of those little black tubes is an affordable way of sharing in the luxury and elegance of the brand – and of keeping up with the latest trends. The same goes for Dior, Tom Ford, Armani and the other beauty brands which belong to fashion houses.

The history of the lipstick as a staple of our beauty routine stretches back to the ancient civilsations of Mesopotamia and Egypt, when both sexes painted their lips using such natural dyes as carmine, which is made from ground-up insects, or sheep’s blood. By the 16th century, women were following Queen Elizabeth I’s penchant for prettifying her pout by colouring her lips with cochineal paint (made from beetles), while their great-great-grand-daughters, a hundred years later, favoured creams that were made with black grape juice.

But it wasn’t always a smooth ride for the early incarnations of lipstick. In the 18th century, it was banned – along with other cosmetics – by Parliament (which associated it with witches), and it was dismissed as “impolite” by Queen Victoria in the 19th.

Of course, back then, lip colour came in little pots or, in the case of Liquid Bloom of Roses, which was imported from England by the founder of the Parisian beauty house Guerlain, in a little bottle. Monsieur Guerlain soon changed its formula and created Liquid Rose Extract “for lip colour with great staying power that lasts through meals”. It continued to sell until 1958.

Guerlain was also responsible for the very first modern-day lipstick, made with a wax base in 1870. Ne m’oubliez pas was its name and it came in a refillable container with a “push-up” mechanism. The first swivel-up tube was patented in 1923, in Nashville, Tennessee, and 13 years later Guerlain created the Rouge Automatique – which it has recently revived – a lipstick with no cap, that can be applied using just one hand: perfect for the girl on the go, who can’t take her eyes or fingers off her phone as she does her lippie.

And it’s not just the design of the containers and the formulation of the lipsticks that have changed over the years; the colours have come in and gone out of fashion. The most enduringly popular lipstick colour is undoubtedly red, since it’s a dramatic

variation on the natural colour of the lips.

Deep, dark red became popular in the late teens and early 1920s when such sexy silent movie stars as the “It” Girl, Clara Bow  and the vampy seductress Theda Bara (right, as Cleopatra in 1917) wore it – anything lighter wouldn’t have shown up in black and white. Not only did they kick off the fashion for red and scarlet lips, but Clara Bow also ignited the trend for “bee-stung” lips, the style of applying the lipstick so that it exaggerates the centre of the lips.

During the 1940s, lipstick was harder to come by because essential ingredients, such as petroleum were unavailable. In Britain, production of cosmetics almost completely ground to a halt and women

swapped tips on how to make their own lip tints using beetroot juice or by melting down the stubs of old lipsticks. No7 lipsticks, many of which hadn’t been available during the war, made a comeback in 1949 with a range that included several variations on red.

Indeed, red remained the lipstick shade of choice for Hollywood stars and would-be glamour pusses well into the 1950s, the decade when Revlon launched its iconic Fire and Ice shade, which returned to shops late last year. As the 1950s went on, the pinks and corals shades introduced by Christian Dior also became popular across the world. But the biggest, most radical change in lipstick fashions took place in the early 1960s – and it was all down to one woman: Elizabeth Taylor, who died last month.

Elizabeth Taylor’s services to lipstick should have earned her an award. Not only did she show, in the famous lipstick-on-the-mirror sequence in her movie Butterfield 8, how handy the cosmetic could be in those moments when you find yourself without pen and paper and have to leave an urgent message for your lover, but she also set a new trend in make-up fashion when she starred in

the infamous and extravagant epic Cleopatra, which finally came out in 1963 after being in production for two years.

Liz Taylor’s exotic make-up when she played the Egyptian queen may have borne some resemblance – at least in terms of the elaborate eye decoration – to images of the real Cleopatra, but it was also designed to show off her exquisitely beautiful face, and in particular those famous almond-shaped, violet-coloured eyes. All emphasis was placed on the eyes, and her lips were kept light-coloured – in pale corals and pinks – throughout the film.

The effect of this bold eyed, pale-lipped look was sensational. Revlon picked up on it immediately and launched the Cleopatra collection (including “Sphinx Pink” lipstick), which offered a watered-down version of the Liz-as-Cleo look. Andy Warhol later said that Cleopatra was the single-most influential film in terms of style in the 1960s: it certainly launched the make-up trend which defined the 1960s – and it’s a look which is still popular today.

Of course, these days, anything goes lipstick wise – you can work a 1960s, Cleopatra-inspired look one day; a shiny red 1950s Hollywood pout the next and a vampy dark 1920s one at night – and there are any amount of colours, textures and finishes to choose from. 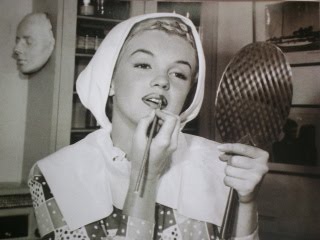 shades with brights for summer. After all, changing you lipstick is the cheapest way to immediately update your look.. Not for nothing did Max Factor advertise its Color Fast lipsticks, way back in the 1950s, with the strapline: “High fashion for every woman’s lips.”

But the last word on lipstick in the 2010s should really go to the American comic Jerry Seinfeld, who once said: “Where lipstick is concerned, the important thing is not colour, but to accept God’s final word on where your lips end.”

One response to “The Lipstick Renaissance”